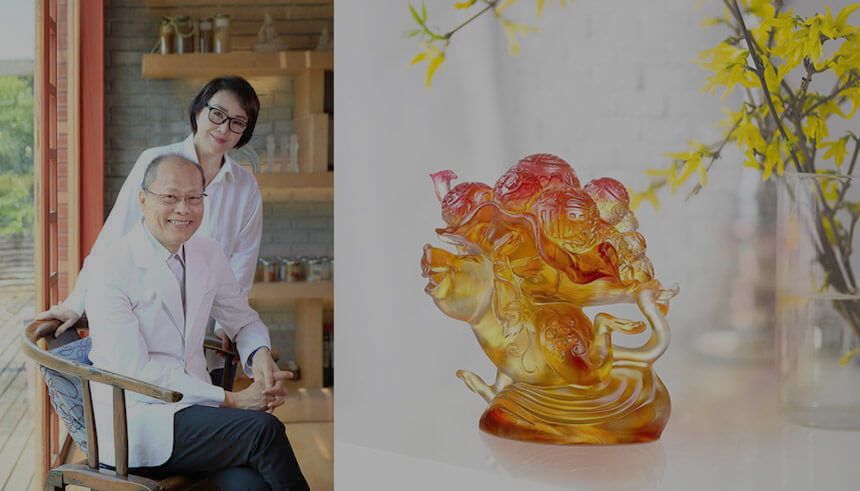 Nowadays, LIULI Gong Fang is a household name in China. Their brilliantly colored crystal pieces, which range from elaborately detailed dragon sculptures, to simple jewelry boxes, can be seen in LIULI’s 41 galleries and in more than 35 museums around the world. The name LIULI (which means “crystal” in Chinese) has become synonymous with craftsmanship and Chinese culture; each piece is designed with an aspect of Chinese philosophy in mind and handcrafted using a laborious 12-step process.

Yet, before 1987, hardly anyone had heard of Chinese crystal glass art. The last time it had been practiced was during the Han Dynasty, over two thousand years ago, after which it was subsequently lost. It wasn’t until Loretta H. Yang and Chang Yi founded Asia’s first Chinese glass art studio in 1987 that the art form was brought back on a global scale.

The history of LIULI

On the surface, Yang and Chang are not the most likely people to bring back the lost Chinese art of crystal sculptures. Yang was a renowned Taiwanese actress who had won numerous awards and accolades, including two Golden Horse Awards, Taiwan’s equivalent of the Academy Awards. Likewise, Chang is an acclaimed filmmaker and won a Golden Horse Award for Best Director for his 1985 movie, “Kuei-Mei, a Woman.” Yet, both gave up the entertainment industry to work in glass-making (although Chang has since returned to focus on developing Chinese animation).

Chang says they decided to shift to glass art because they felt the form could better convey Chinese culture. He chose pâte-de-verre (“glass paste” in French) as the medium not only because of its roots in the Han Dynasty, but because the technique was similar to Chinese bronze casting.

“When we observe the art of glazed glass, we are full of many visions,” shares Chang. “Because in this art form, we feel that the creating process gives us great freedom and can convey the emotions and wisdom of our national culture.”

When he and Yang decided to start their LIULI studio in 1987, there was only one studio in France that was capable of using the technique to create glass art with skill. Although there are currently over a hundred glass studios in China, Chang says when they started it was almost “unheard of” in Asia. They had to take it upon themselves to master the technique—but gave it a distinctly Chinese twist. The two of them even decided to rename this new form as “liuli” to better represent the studio’s mission in promoting and representing Chinese culture.

Starting a studio from scratch in an art form that few people in China had heard of wasn’t easy. They had trouble learning the difficult process of pâte-de-verre and faced serious investment issues. Determined to make it work, Yang put her own personal assets into the studio and even convinced her father and brothers to invest, as well.

“Loretta is a determined artist with a strong will who has been tirelessly improving her techniques, almost minute by minute,” says Chang. “Although I set the direction and the process of implementation, without Loretta’s determined efforts, LIULI wouldn’t have its own language, its advanced techniques and an established business in the Chinese community.”

Liuli follows a 12-step process that involves designing and perfecting an initial clay model, creating a silicone mold of that model, creating a wax form to be used in the plaster molding process and adding metals during the second kiln firing to give the pieces their vibrant colors. Because the pieces are individually handmade, each one is unique in terms of color gradation and the bubbles that naturally form during the casting process.

Each collection that LIULI creates is rooted in Chinese philosophy and thought. Some of the sculptures are taken from mythology, utilizing fantastical creatures such as the phoenix and the dragon, both auspicious symbols in Chinese culture. They have collections centered around each animal in the Chinese zodiac, and glass pieces that are designed with feng shui concepts in mind, to promote positivity and prosperity for each individual. Even their jewelry boxes are inspired by the nation’s history, taking inspiration from antique Chinese lidded containers and using chrysanthemum designs, which is a symbol of health and longevity.

“We believe in Chinese culture—not only its aesthetics, but also its wisdom, tolerance and benevolent thought,” explains Chang. “We want to pass down the thoughts and emotions of the national culture through sharing our art with the world, especially in today’s world, which is full of opposition and conflicts. When we create ‘liuli,’ we don’t take it as a personal creative piece, but as a creation full of a sense of mission.”

Yang and Chang’s goal is for each glass piece to be a story or poem of their culture. “Our creative style is obviously different from other glass arts in the world, because the mission of each art piece is to create a harmonious world,” says Chang. “The starting point of our creation is always to think about the concept, the society and our motto, which is ‘constantly create works that are beneficial to the people.’”

The small studio in China has since grown to be a globally recognized name in the art community—yet, their goals and ambitions have remained steadfastly the same.

“For us, all we want is nonstop creation, getting on the global stage so that all people in the world can understand Chinese culture and can gain a kind of harmony through mutual understanding,” Chang says. “Although it’s still a long way to achieve all of that, this would be the most meaningful vision of LIULI.”